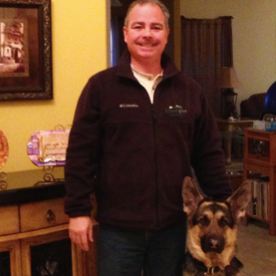 Can You Tell Us A Bit More About Your Role Here at Freshpet?

I am responsible for the overall operations of the Freshpet Kitchens in Bethlehem, Pennsylvania, where we make all of our Freshpet rolls and meals for dogs and cats. It really is an amazing facility and I’ve loved overseeing it since we officially opened.

Any Memorable Stories That Stand Out Since Starting With Freshpet?

In the summer of 2013, we were giving tours of the new Freshpet Kitchens to all of the employees who had been previously making Freshpet food in the original Quakertown, Pennsylvania facility. Everyone was transported in chartered buses at specific scheduled times. On one of the trips, as we were approaching the new facility, in anticipation and excitement I loudly chanted a made-up company cheer: “FRESH! FRESH! FRESH!” Well, the bus driver thought I said “FIRE! FIRE! FIRE!” Needless to say the bus came to a sudden stop; the passengers thought it was funny but the driver was not amused, to say the very least!

How Did Your Dog, Walter, Come to Join Your Family?

My family has always been biased towards German Shepherds. After moving to Pennsylvania nearly three years ago, we brought Walter home to help break in our new home. Walter is obedience and agility-trained, and has even participated in a few agility demonstrations. However, the last couple of months he has been sidelined due to a sprained ACL.

If You Had to Compare Walter to Someone Famous, Who Would It Be?

During his agility demonstrations, if you saw how he tackles the obstacle course with reckless abandonment, you would understand why he was named after the greatest running back in NFL history, Walter Payton!

Which Freshpet Recipes Are a Favorite In Your Household?