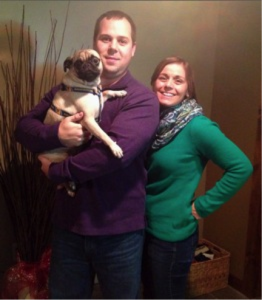 Can You Tell Us Some More About Your Position Here at Freshpet?

I’m the Retail Coordinator for the Pet Specialty division. In other words, I manage Freshpet’s store partners and ensure that the refrigeration units in stores are clean and merchandised properly. I’m also an Account Manager for Pet Supplies Plus.

Is There One Particular Story That Stands Out Since Starting With Freshpet?

The moment that stands out the most was when I signed up my first retail partner six years ago. The owner of a three-store chain in the Chicago area agreed to bring the product into all three of his stores. The owner has since added three new locations around Chicago and has brought in Freshpet products into each of those stores as well. I will never forget that day.

Tell Us a Bit More About Gus:

Gus is a cuddler, to say the least. When my wife’s co-worker’s pug had puppies a few years ago, they offered one of the puppies to us. For the first few months of having Gus in the house, he would sleep right next to me with his head on the pillow – it was great. As he got older, he started sleeping down by our feet – curled up – which is where he still spends his nights after we’ve fallen asleep.