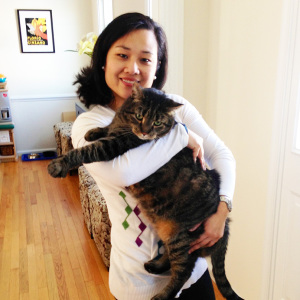 Can You Tell Us A Bit More About Your Role Here at Freshpet?

I head up the Research and Development team here at Freshpet. For my job, I’m responsible for overseeing the development of new and exciting recipes for Freshpet that will make pets happy, keep them healthy and provide ease and convenience to owners when it comes to feeding their loved ones.

How Did Phoenix and Orion Come to Join Your Family?

Both of my cats were adopted from the local shelter that I volunteer with. Orion was saved on the day that he was going to be euthanized. He had many issues with his skin, digestive system and weight. Phoenix was a six-week-old kitten when we adopted her. Before the SPCA brought her to the shelter, she was living in an underground drain with her mom and siblings. I’m pleased to report that both cats are now very healthy and active thanks to Freshpet food!

If you were to ask Phoenix and Orion what their favorite hobbies are, one of them would say their role as an Official Cat Food Taste Tester for new Freshpet products that we’re developing. They are very picky eaters and both demand great tasting food. If the new products do not meet their approval, it goes back to testing until they are deemed “paw approved!”

Which Freshpet Recipes Are a Favorite In Your Household?

Phoenix and Orion love their Vital Complete Meals the most, especially the Chicken & Ocean Whitefish recipe!